It’s been an interesting year for the Nintendo 3DS so far. With the PS Vita being released and being crowned as the ultimate handheld gaming device – the 3DS is slightly running behind in reputation and in spec. So, what do you give an audience of Nintendo loving individuals to restore their faith? Great video games.

This is a list of the top eight games that will restore your faith in Shigeru Miyamoto’s handheld device, which will make you scream with laughter like a Japanese girl having just met a real-life Pikachu.

Rayman has been around. In his time, this little fella of disconnecting limbs has graced such platforms as the Atari Jaguar, Xbox 360, PC, PlayStation 1 & 2 & 3, Sega Saturn, Game Boy Advance & Colour and the PS Vita. Now, finally it’s the 3DS’s time to get a dose of the action. This game has gained critical acclaim on other platforms with its lush graphics and heavily enjoyable gameplay – so there is no reason why this game is not going to be a smash hit on the 3DS. One of the weirdest games to grace UK gaming audiences from Japan, but boy do people love it. Originally on the N64, Animal Crossing works its way 15 years later onto the 3DS. Rumour has it that the game has changed very little since the original title – so Nintendo are employing the policy of ‘if it ain’t broke, don’t fix it!’. This loveable little role-playing ‘hoard-fest’ (you collected a lot of items in the original) will weirdly worm your way into your heart.

Paper Mario was a massive hit on the 64 and on the Wii also – and has been one of the most positive influences on the Mario franchise. Similarly to Animal Farm, Miyamoto has apparently chosen not to change much from the original games. Is this Miyamoto becoming wary that people aren’t as excited about his games as they used to be, trying to drag old N64 owners to the way of the 3DS? Only time will tell. Expect colourful graphics, and plenty of Goombas to shake a stick at – you’ll have a lovely time watching Mario’s latest adventure unfold for sure.

Are you beginning to see a pattern here? Luigi’s mansion already proved a success on the N64 and as result of this, Miyamoto releases the next one in the series onto the 3DS. The original Luigi’s Mansion wasn’t a big as a hit as it should have been – and so the game sticks to its guns with similar gameplay, plunging into the depths of a haunted mansion, sucking ghosts up into your backpack-vacuum cleaner. Sounds like fun? It damn sure will be. 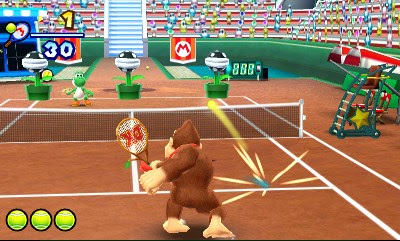 Yet another classic N64 banger is working itself onto the 3DS. Mario Tennis Open comes equipped with sixteen playable characters and some secret ones also! Multiplayer games on the 3DS is somewhat lacking in numbers, so this game is designed to level the playing field. Connect to nearby mates with Wi-Fi and give em’ a good thrashing to your heart’s content. Have a look at this brand new trailer taken from E3 to see some tennis-tastic gameplay.

A Final Fantasy ‘Theatre Rhythm Action’ game? What? Have Square Enix lost the plot? Maybe not. From a somewhat failing franchise (the online games really killed things) Square Enix looks for new ways to hook in audiences whilst using the 3DS features to its advantage. Will it be good you ask? Well, with some solid reviews from the Japanese release under its belt (shifting 130,000 units in just over a month) there is no reason why the game shouldn’t be a success. But then again, the Japanese do have a very ‘special’ taste in games.

Not too much has been released about this game title so far, except the fact that it’s a follow up to the smash-hit Skylander Spyro’s adventure. You’ll be able to explore virtual and physical realm of the game through cross-platform toys – which sounds like a lot of fun! There is talk of the Wii U being utilised also which, rumour has it, automatically syncs the Skylander toy into the Nintendo world when in physical proximity of it.

In this brand new RPG title, you play dragon emperor Fang who has had his powers taken away by Goddess Clunea. Naturally, you want these powers back – and the game follows your journey to do so. Utilizing unique ‘Unchain’ battle system, and finding certain characters including a medusa princess, a phoenix and a golem prince along the way – the game has the formula of any successful RPG. We are also promised 60 hours of gameplay by the devoper FuRyu games, so there is many hours of joy to be had!

Thanks to vouchercloud.com for this great round-up. Please comment below with any other exciting releases that you feel deserve a shout out. If you want to pre-order any of the upcoming 3DS titles, grab one of Amazon’s discount vouchers before you reserve!